After many months of occasional development, Piet and myself can present a new version of our game Bercadain Betlas.

We've got a public Trello board on which we put our development plans for the game and for each release, what we're working on and what's finished.  As you can see, we managed to complete a lot of stuff for the new release!

We got most of the features we wanted for this release in, which is awesome! There were things we were initially set to put in this release that didn't make it in, however. I notice that these features are more asset-heavy ones, and while they were implemented in code and functional, we cut them from the release because they lacked the polish the other parts of BB have. This includes character orientations (you suddenly need 4 sprites instead of 1, never mind the animations...), and audio. The movement was intended to be non-instantaneous, but without a walking animation this was actually worse.

The other side of the coin is that because of polish and changes during development, other features we didn't originally plan made it in! Piet's overworld and surrounding asset pipeline has made it really easy for me to make different levels available to the player. Skill descriptions, status effects, faction banners... all made it in and really add to the experience, while implemented in such a way that they are still foundations we can easily build upon later.

As mentioned above, there's a lot that's new!

Something I really wanted for this release, as it'll be the last one for a few months, is to have no more placeholder graphics. It took me quite some time with my lack of experience, but everything has assets now that I wouldn't mind lasting till next release. Of course they will be polished when one of us feels like it, but there's less pressure now, and a style to follow/improve upon, which is nice. I really like the tiles. 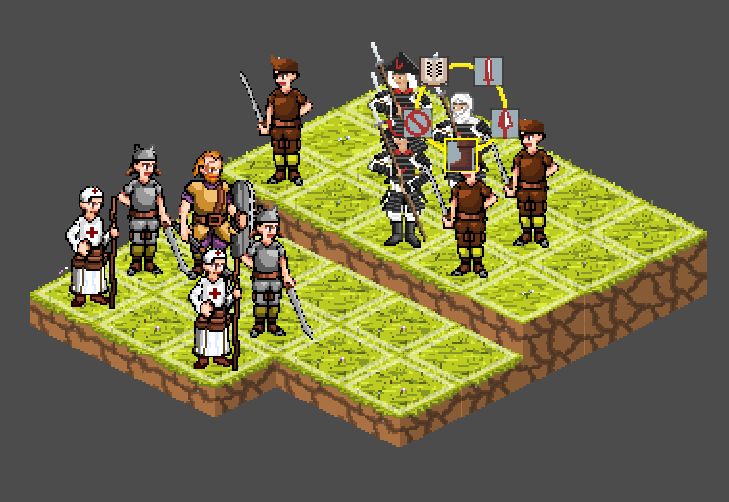 There is now an overworld map in line with our story setting, and made it traversable through different levels. This will evolve in a future release, but for now it works really well! You can look around the map and check it out! We wanted to do it right and also tried our hand at GIMP scripting, which was... interesting.

To get a taste of the possibilities scenario wise, and to showcase all the different units and skills, I set out to create a couple of different levels. Can you guess what story is unfolding in each?

I think this speaks for itself. You can now move around the map using the arrow keys! Hold shift to go faster.

How to implement the skills in a more-or-less future proof way was something I wrecked my mind over a lot during development, and it was the last big thing I worked on before renewing my pixel art career. This thinking naturally led me to status effects, which naturally led me to character stats. Eventually, I ended up implementing all of them, being especially proud of the status effect implementation.

In the gif below, you can see each skill in the selection wheel having a short description in the UI at the bottom. This will hopefully be expanded to show more details, but it's a good basis for now. The sohei has a naginata, allowing him to both slash and stab. These are different attacks with different ranges and crit chances. He ends up enraging one of his friends.

Skills have a lot of variety and this variety can be mixed very easily. This functionality includes raw damage and healing, but also applying stackable status effects that can apply:

Resulting in a potentially deeper system than it shows at first sight.

Skills can also miss or hit, since one of the character stats that were implemented was accuracy. The others are damage and damage mitigation, making it easier to effectively buff hero units. You'll notice that Fyntyn hits harder and takes less damage when you play.

Watch how the Ashigaru misses, after which the Bercadain Surgeons heal up their comrades.

In the gif below, the mercenary blind the Bercadain Champion, reducing his chance to hit by 66%, being a very effective debuff. (Probably quite imbalanced since there's no cure for it yet).

A small detail that was implemented because of the lack of AI (which is the only feature keeping this from being really playable, it's currently a 2P versus game if you want a competitive element) is to show to which faction a unit belongs by giving it a emblem. Mercenaries have coins, Shi-tons have their variation of the Hinomaru, and Bercadain's forces have its shield as faction emblem. This is a nice detail that will definitely stay for when there is AI. It allows interesting multi-faction stories to unfold.

While our original prototype and most of this update was developed in Godot 2.1.4, once I noticed how much better Godot 3 was regarding developer happiness and potential, I convinced Piet and we ported it to Godot 3 in a really short time. The base game took about an hour, and our shaders a little longer because of the lacking documentation in regards to porting them.

I'd recommend porting your project to Godot 3 ASAP if it's still in heavy development, as it really does make your life easier!

We also made a Godot plugin for easier tileset creation from PNGs. Check it out if this peeks your interest! It looks like this: 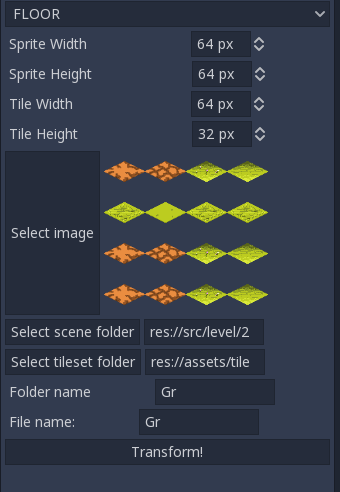 The UI could be a lot tighter and there's a lot of improvements planned that will come together when I improve our graphics pipeline for tiles (with Tiled).

Thanks for reading! Don't hesitate to share this if it piqued your interest, or to leave a comment with some feedback!